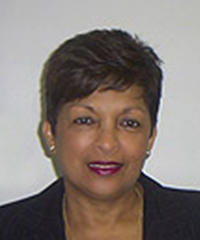 KAMALA BHOOLAI joined the firm as a Legal Consultant in 2004. She is a commercial lawyer with international experience and an expert in certain aspects of the petroleum and energy sector.  She is one of the leading oil and gas lawyers in the country.

She was a member of the core team and legal coordinator working on the development of the intra Caribbean Pipeline Project.

She provided assistance with preparation of bid documentation, analysis of bids, review of feasibility studies and drafting of various types of petroleum and mineral agreements and licences, petroleum and mineral legislation and related tax and fiscal legislation. She prepared the first LNG licence for Trinidad and Tobago. She was also involved in the initial stages of the Bugagali hydropower project.

She prepared, and participated in negotiations of, the first Production Sharing Contract (PSC) for Trinidad and Tobago. She had responsibility for preparation of various licences required under the petroleum legislation and agreements. As a member of the senior management team and cabinet appointed committees, she contributed to the formulation of policy including a policy for natural gas, and preparation of petroleum and related fiscal legislation.

From 1986 - 2002 she was Special Adviser (Legal) in the Economic and Legal Services Division of the Commonwealth Secretariat, in London, England and Acting Head of that Division from 2001 - 2002.  In those roles, she was involved in a range of projects in various countries in Africa, Asia, the Pacific and the Caribbean. She has advised on the legal, policy and strategic aspects of investment projects and the review and design of regulatory/fiscal/contractual frameworks, with particular emphasis on projects relating to development of the petroleum and mining sectors of various countries.

She also works on commercial agreements and leases; was involved in projects to combat money laundering and financing of terrorism, development of stock exchange projects, a telecommunication project and National Housing Development construction projects. She contributed to the legal review of the Credit Unions Bill, 2014 and Co-operative Societies (Amendment) Bill, 2013 recently undertaken by the firm.