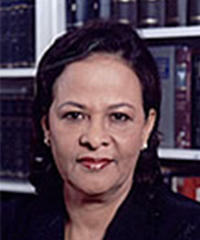 She was engaged as a consultant to the Central Bank of Trinidad and Tobago to review laws that affect the payments system. She was a consultant to the Central Bank of Barbados working on the legislative framework for the introduction of deposit insurance in that country. She was a member of a joint consultancy team for the World Bank which carried out a general review of the deposit-taking institutions in Trinidad and Tobago.

As the Legal Advisor and Corporate Secretary to the Central Bank of Trinidad and Tobago and then Senior Manager, Lucille managed the legal department of the Central Bank for several years and she accumulated a wealth of experience in financial and capital markets regulatory issues. She was at the helm of the project in the nineties for the modernising the legislative framework for banking supervision which led up to the enactment of the Financial Institutions Act 1993 and various other legislation governing the financial sector.

Lucille was head of the legal team responsible for the restructuring of three failed banks and their merger to create First Citizens Bank Ltd, now the third largest bank in Trinidad and Tobago and was also a member of a multi-disciplinary team appointed to oversee the closure of failed financial institutions, managing the liquidation and payout arising from the closure of those institutions.

She has organized and conducted seminars on legal and banking regulatory issues and has presented a number of papers at regional and international seminars. She prepared for the Caribbean Law Institute a report titled “A Banking Law Reform for the Commonwealth Caribbean, June 1993”, the recommendations of which formed the basis of a model uniform banking law adopted by the Caribbean Countries.